S ixty years ago this week the "forgotten war" came to an inconclusive end. The Korean war was perfectly mistimed for me.

On 25 June , the day I graduated from the University of California, Los Angeles as a GI Bill student, North Korean troops in their Soviet-made tanks smashed across the 38th Parallel that was born as the bastard child of the political division of Korea between Russia and the US at the end of second world war.

This artificial boundary, splitting the Korean peninsula in two, was meant to keep the Russians from taking the whole country after Japan surrendered.

The line had been hastily drawn with pencil using a National Geographic map by two junior American officers in President Truman's White House. But five years later, supported by Stalin's Russia and Mao's China, the North Koreans under Kim Il-sung had decided the time was ripe to force the reunification of Korea under communist rule.

A genocidal three-year war followed. Almost all of the ex-second world war soldiers I knew were, like me, scared to death of being called back to fight in a war nobody but psychopaths wanted. Most of us were vague even about where Korea was located in the Pacific. We certainly didn't know the ins and outs of Korean history or that fighting between North and South was just another violent chapter a long-brewing civil war whose roots lay in Japan's brutal 19th century occupation of a country that geographically seemed a mere appendix to China.

But what was obvious even to the most ignorant ex-GI was that this new war in the Pacific came out of a cold war realpolitik that pitted Stalin's Soviet Union against the United States in a constant game of Armageddon chicken. General Omar Bradley, then chairman of the joint chiefs of staff, called Korea "the wrong war, in the wrong place, at the wrong time, with the wrong enemy".

Nevertheless, once the North invaded, the world was brought to the very precipice of all-out nuclear war. In three years of frustrating trench combat reminiscent of Flanders and the Somme, fought on a miserable barren lunar landscape of hills forever taken and retaken, refugees and prisoners-of-war were machine-gunned indiscriminately. Roughly 36, Americans died in theater, with Korean casualties on both sides well into the millions. The savagery was unphotogenic, unromantic and uncivilized.

Ground commander Matthew Ridgeway, who liked having his photo taken wearing primed hand grenades, said he wanted to "'wipe out all life'" in enemy territory. In effect, this meant that all of Korea, North and South, friend or foe, became a free fire zone. It predicted Vietnam. MacArthur jovially called him "my pet fascist". 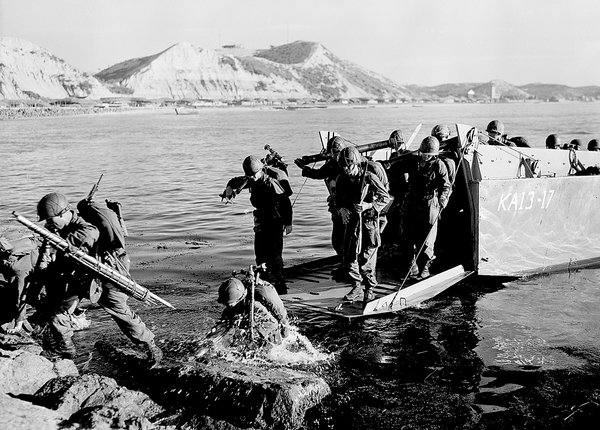 MacArthur and some of President Truman's generals urged that atomic bombs be used against the communists, especially when MacArthur's prediction that the Chinese would never enter the war proved fatally stupid. Today it's hard to imagine the hysteria that infected the nation, especially after the North crossed the 38th parallel. Americans went temporarily nuts.

The war has forced thousands of people to flee their homes and seek protection in their own country. The Saudi-led coalition has bombed schools in the last three years since the start of the war alone. Al-Qaida has also gained ground in southern Yemen. We offer rare insights into the country and highlight the plight of the war-ravaged population. Posted by admin on Author: admin. About us Contact.